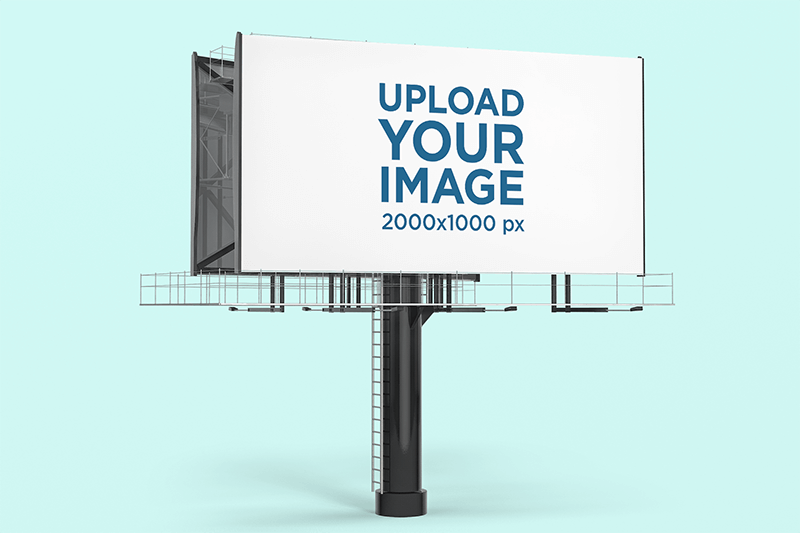 Step up your game by making Placeit’s billboard mockups part of your visual marketing strategy today and finally get your business the attention it deserves. Billboard mockups are the ultimate marketing tool because they allow you to advertise your products and ideas within a real-life context image.

How cool is that? Imagine not having to spend huge amounts of money and time on marketing campaigns that in the end sometimes turn out to be useless, and instead of being able to use mockups to showcase your ideas, wouldn’t that be awesome?

Billboard mockups are really easy to use and won’t take longer than a couple of minutes to be ready, so making them an essential asset of your marketing strategy might not be such a bad idea. To start using Placeit’s billboard mockups all that’s necessary for you to do is choose a template that matches your visual marketing ideas, upload an image featuring your products or ideas and let Placeit handle the rest of the work for you.

Thanks to Placeit’s mockups you won’t need to use Photoshop or any other editing software anymore, imagine that!

Here’s a list of 10 billboard mockups for you to check out: 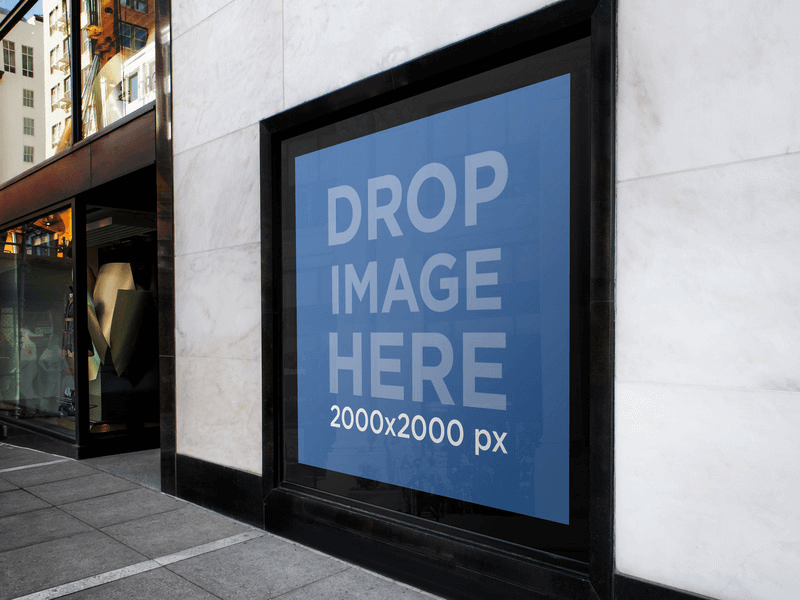 Display your advertisement on this square billboard mockup set on a wall. It is displayed beside a chic boutique entrance overlooking the street. The wall is made of white and grey marble and the sidewalk is a dark grey concrete.

On the top left corner, a bright painted apartment building can be seen in the afternoon sun. The billboard mockup holds an image of 2000x2000px. This is a great urban setting for your ad. 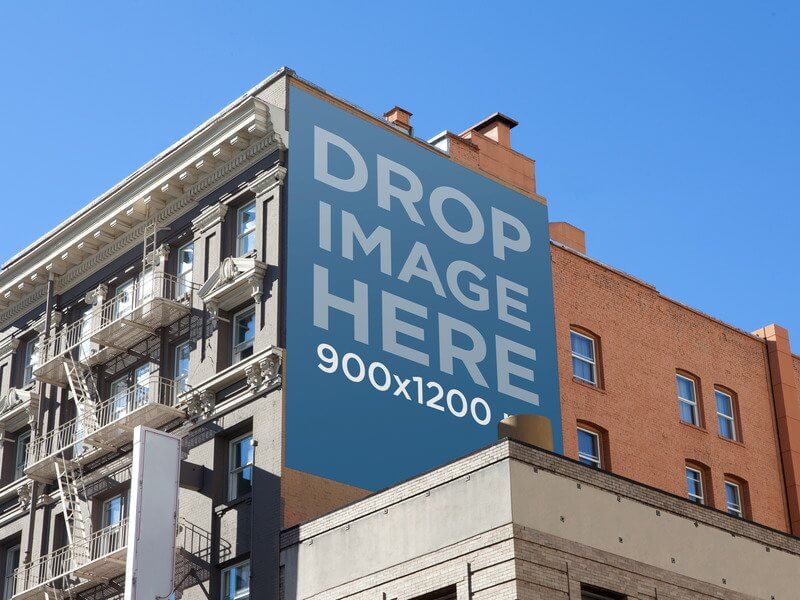 Show off your new ad on this billboard mockup set against a mid-rise apartment building in an urban landscape. The apartments are dark grey with white accents. They have a balcony and ladder to go to the top of the building. The side of the building is red brick. 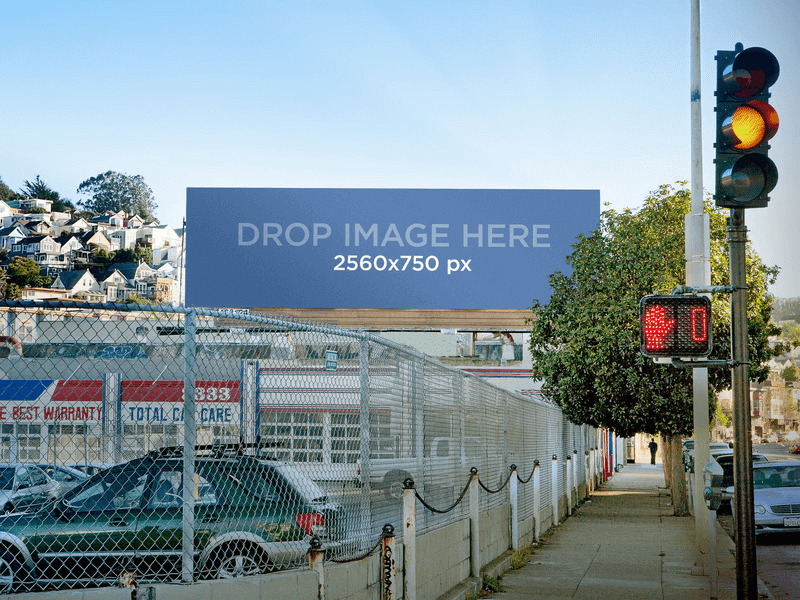 Display your billboard in this photorealistic billboard template that overlooks the city. It holds an image of 2560×750. Give your ad mockup the perfect urban setting with this template.

In the far back, you have a hilltop of lovely homes. In the foreground, you have a parking lot in a classic-looking neighborhood.

Banner Mockup on a Building 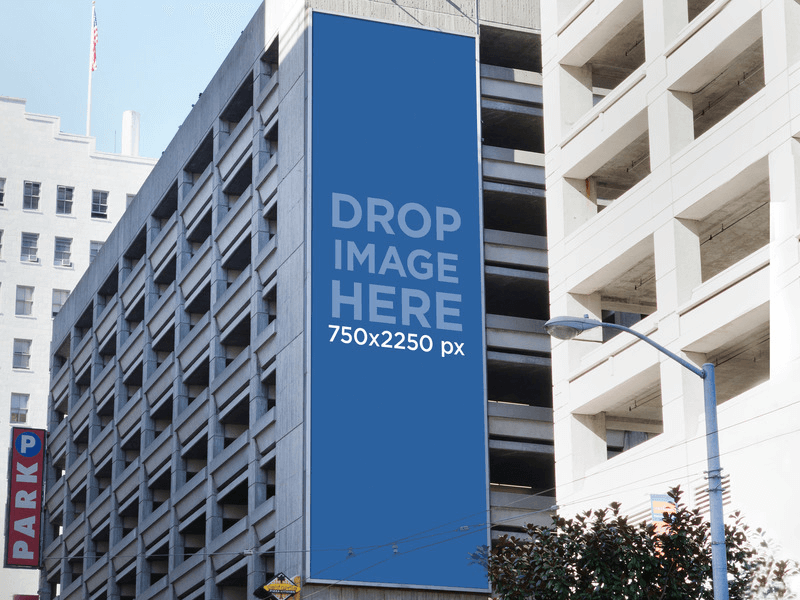 Show off your great ad mockup on this huge banner. It hangs from the side of a parking garage in an urban area. The banner will hold an image of 750x2250px. This is a great place for the most majestic ads.

Billboard Mockup at a Bus Station 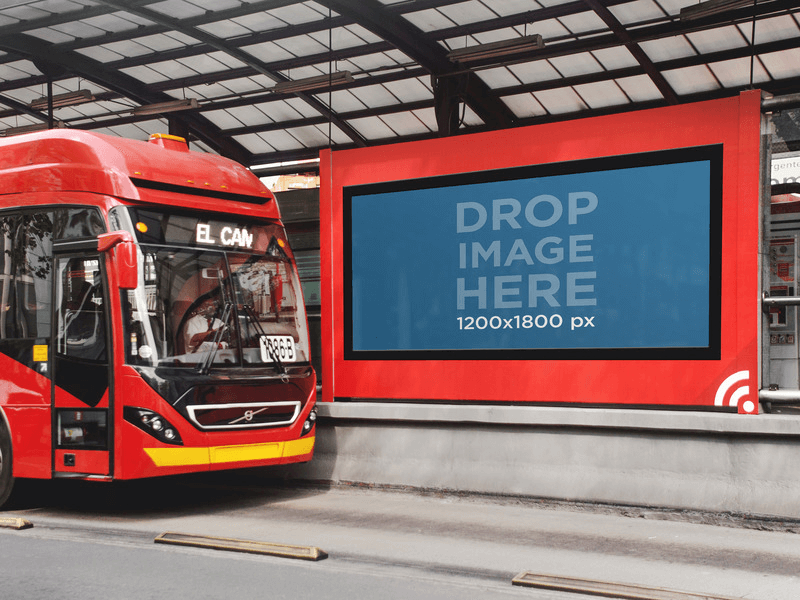 This is a stunning piece of digital advertising you should be using right away. This image features a bus station with a large billboard in which you can display your business information, imagery, logo, or anything you want. This billboard mockup makes it really easy for you to create a compelling image that will create an impact on your business partners and your consumer demographic, use it right away to see for yourself!

Billboard Template Over the City 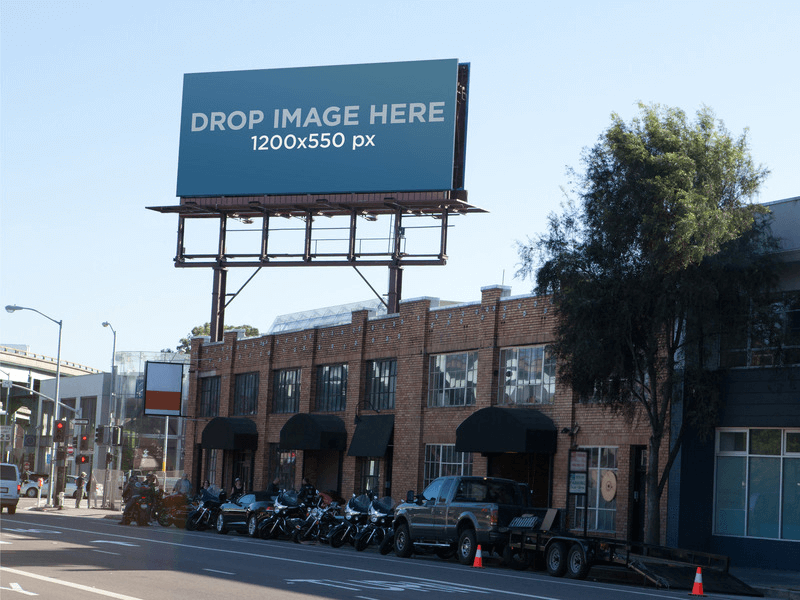 Create great mockups on this billboard overlooking the city. The billboard is set on top of a low-rise building in an urban setting.

You can display your advertisement in 1200x500px. The building it is set on has a row of bikes parked in front of it. They give the location the look of a biker bar.

Mockup of a Billboard Standing in the Center of a University 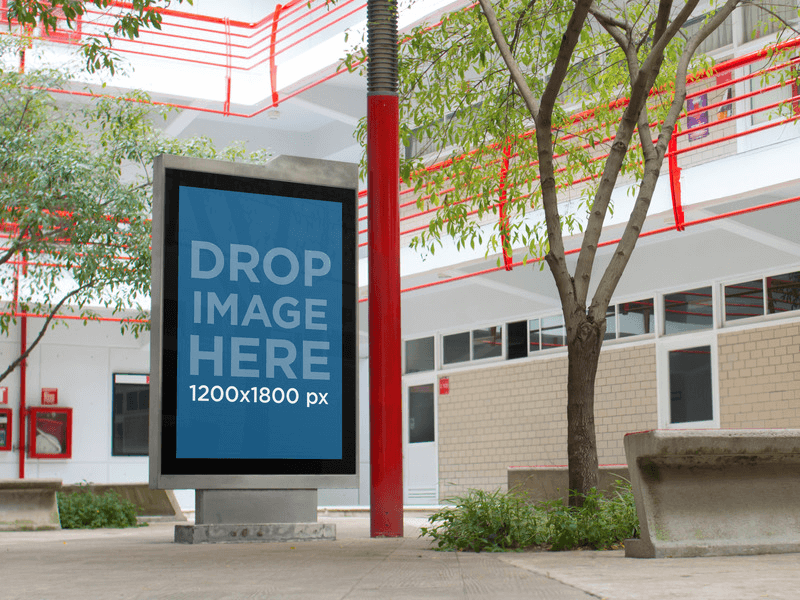 Use this billboard mockup to help you advertise your business ideas and stand out from the rest of the competition out there on the market. Stop wasting time looking for original marketing visual content and start using Placeit’s mockups to help you solve your problems.
This billboard mockup features a billboard standing in the center of a university patio. To customize this image just drag and drop a screenshot of whatever it is you want to advertise onto the billboard and let Placeit resize it and adjust it for you. Thanks to Placeit now you can get authentic, appealing visual content within minutes.

Billboard Mockup on a Class Building 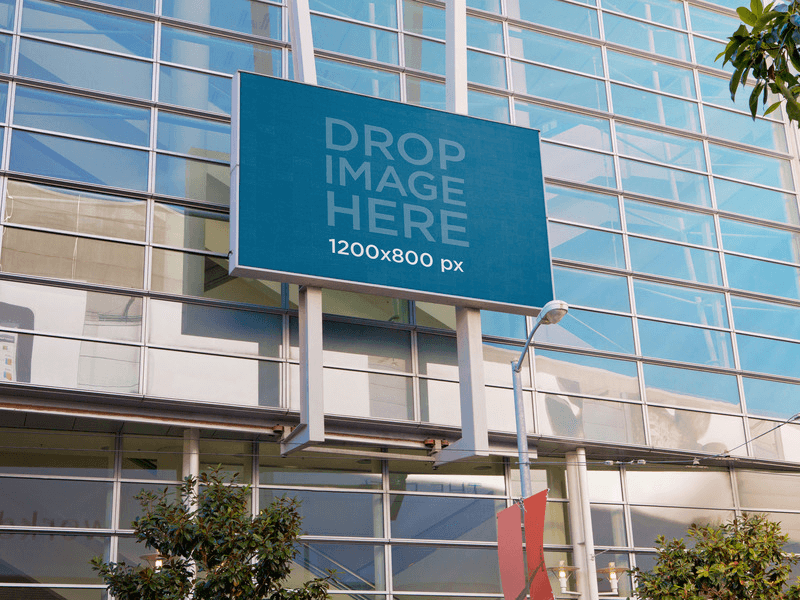 This is the perfect place for print advertising. This is a perfect urban setting for any ad. 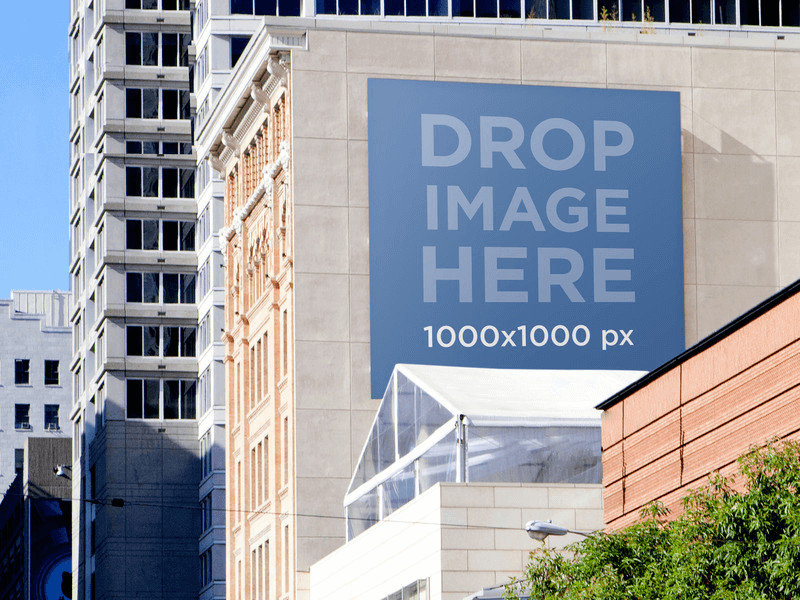 You can set up your advertisement in this great billboard mockup. The billboard is hanging on the side of a grey building. This makes a great urban setting that you can take advantage of. This is a great photorealistic mockup for any type of print advertisement. 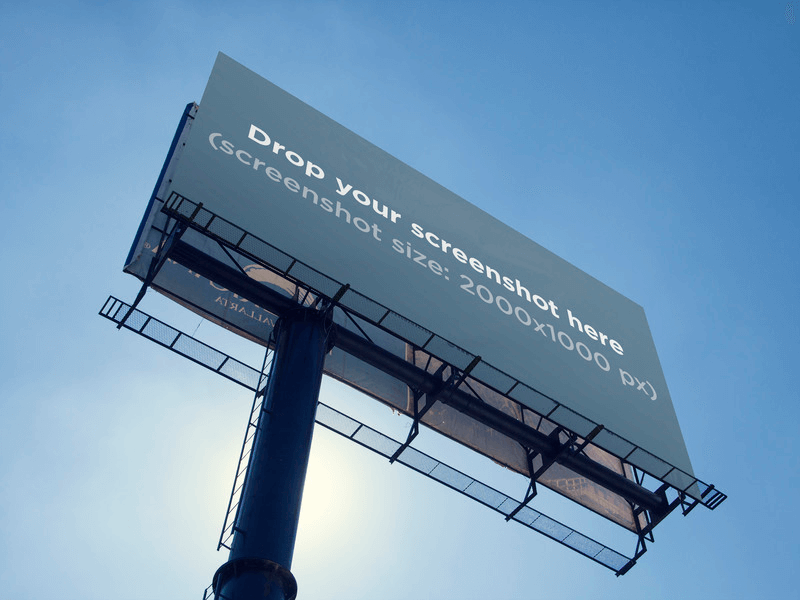 If you are looking for a billboard mockup, why not use this stage, with the towering billboard against a bright blue sky? Your screenshot must be in a 2:1 ratio, to better fit the shape of the ad, but you can also crop it after uploading. Impress your clients with this mockup.

Don’t you think these billboard mockups are great? Wouldn’t they work perfectly to help you advertise your business ideas and new products? If you think they would, then don’t waste any more time and make them part of your visual marketing campaign.

Take a look at our Billboard mockups and choose your favorite! To access our entire gallery go to Placeit and check out all our mockups! Also, check out our collection of Banner templates to have a wider range of options and these guerrilla marketing tips to make your campaign really stand out.